DALLAS (December 19, 2016) – Second Thought Theatre opens its first four-show season since 2013 with the area premiere of Hillary and Clinton by Lucas Hnath. Laura Colleluori makes her STT directorial debut after previously serving as assistant director and dramaturg for Grounded (2017) and A Kid Like Jake (2016). This year she directs “a work of total fiction” about a woman named Hillary who is trying to become the president of a country called the United States of America in an alternate universe light years away. Hillary and Clinton begins with previews on Wednesday, January 10 and runs through Saturday, February 3. All performances of Hillary and Clinton will take place at Bryant Hall on the Kalita Humphreys Campus, 3636 Turtle Creek Blvd. Tickets to Hillary and Clinton can be purchased online at 2TT.co. 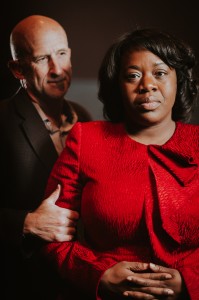 “What I love so dearly about Lucas Hnath’s script is that we are given the chance to encounter these two people, not as this political dynasty mired in decades of scandal and speculation, but simply as humans – as a woman named Hillary and her husband Bill,” said director Laura Colleluori. “In this moment, as we are closing out a difficult, bitterly divisive year and preparing to enter a year that will likely be even harder, it could not be more important to be producing work like this – work that reinforces our shared humanity.”

STT Artistic Director Alex Organ agreed, noting that, “This play focuses on two of the most well-known and complex political figures of our time – and yet, in making the play personal rather than the political, Hnath manages to bring these characters to life in a way the audience has never known them before. We are thrilled to have Laura at the helm to tell their story.”

Hillary was destined for this. She had prepared her entire life for this. And yet, one fateful New Hampshire evening in January 2008, she sees it all beginning to slip through her fingers.

Making her Second Thought Theatre debut, Stormi Demerson stars as Hillary, the woman who would be president if only she could keep her poll numbers, funds, and spirits from plummeting past the point of no return. Exhausted but not yet discouraged, she finds herself questioning, for the first time, whether her dream will ever become her reality. Set during the 2008 New Hampshire primary, audiences may think they know what happens next, but in Hnath’s play these characters aren’t necessarily the people you’ve seen on the news, and the outcome isn’t necessarily what you might expect.

Stormi Demerson (Hillary) DFW Regional credits include her recent debut with Kitchen Dog Theatre in the world premiere of Br’er Cotton, Amphibian Stage Productions, Shakespeare Dallas, Circle Theater, Theatre Three, Jubilee Theater, WaterTower Theatre, SoulRep, Lyric Stage and Cara Mia Theatre. Acting credits include: Mississippi Goddamn, Death Tax, Under The Skin, The Bluest Eye, By the Way, Meet Vera Stark, Wit, Diamond Dick: The Tulsa Race Riots of 1921 (Project X and LaMama Theatre, NY). In addition, Stormi served as a director in the ‘365 plays/365 days’ project by Suzan-Lori Parks. She holds a BFA in Theatre from Texas Christian University and, among other honors, was recognized by the Live Theater League of Tarrant County for her contributions to Jubilee Theatre. In 2014, she was voted Best Stage Actress by The Dallas Observer. This is her first collaboration with Second Thought Theatre.

Barry Nash (Bill) For STT, Barry Nash previously played the title role in Bob Birdnow’s Remarkable Tale of Human Survival and the Transcendence of Self – a production subsequently adapted into an award-winning film. Locally, he has also performed with Kitchen Dog Theater, the Shakespeare Festival of Dallas, Wingspan Theatre Company, and the Dallas Theater Center. Off stage, he works as Head Coach of Barry Nash & Company, a firm that provides performance training and research to business professionals and to television news organizations, including CNN, NBC and ESPN. Barry and his wife Sandra are long-time residents of Oak Cliff and the forever-proud parents of two now-grown daughters, Barrett and Shelby.

Jim Kuenzer (Mark) Jim is thrilled to mark his return to the stage with Second Thought Theatre. Most recently, Jim has been writing and creating music for the Dallas Theatre Center, the Drama Club, and others. Previous works include Lobster Alice and Caucasian Chalk Circle (STT), Vigils and The Pillowman (Kitchen Dog Theatre), and The Last Days of Judas Iscariot and Slaughterhouse Five (RISK Theater Initiative). In addition to performing, Jim serves on the boards of Stomping Ground Comedy Theater and Nouveau 47 Theater. With what little time is left over, Jim naps. He’d like to thank his wife, Jenn, and their countless children for the support.

Sam Henderson (The Other Guy) Sam is a Lecturer of Theatre at Baylor University and holds his M.F.A. from the USD/Old Globe Professional Actor Training Program. Recently, he was seen as Sterling in Jubilee Theatre’s Production of August Wilson’s Two Trains Running. Previously, Sam appeared as Jarrell/Hector in the Regional Premiere of Under the Skin at Circle Theatre. For this performance, Sam shared a DFW Critics’ Choice Award for Best Ensemble and was Broadway World Nominee for Best Supporting Actor. Sam has also appeared at the Dallas Theatre Center as Montague in Romeo and Juliet and as Martin Luther King Jr. in The Mountaintop. Sam can also be seen in the film A Country Called Home starring Imogen Poots, currently on Netflix. An accomplished screenwriter and filmmaker, Sam’s short film, Nicky, was recently awarded a special citation for Most Inspirational at the Austin Revolution Film Festival. Thanks for the support, especially Megan and the kids.

Laura Colleluori (Director) Laura is a director, dramaturg, and producer based in NYC. Born and raised in Dallas, Laura has worked locally with Dallas Theater Center, Second Thought Theatre, Cara Mia Theatre Co., Contemporary Theatre of Dallas, Echo Theatre, and Wingspan Theatre Company. She’s also done some theatre in Nantucket, Chicago, L.A., and Bologna, Italy, and is currently working in New York with The Drama League, Stages on the Sound, and Market Road Films. Laura holds a B.A. from Dickinson College, with additional training from Duke University, Yale University, and the University of Bologna. She is a contributing writer for StageAgent.com. You can find her online there, and also here: www.lauracolleluori.com.

Preston Gray (Sound Designer) Preston is a recent Dallas transplant, after working for six years in the audio industry in Nashville. His work experience includes Pro Audio equipment sales, managing equipment rentals, and freelance mixing for artists. He has system engineered for numerous events and tours including Kenny Chesney’s Brothers of the Sun & No Shoes Nation. Though most of his experience is with live concert events, he also has a passion for supporting his artist wife. He has designed several of her shows, including Ophelia Underwater by Janielle Kastner and Delirium by Enda Walsh and Theatre O. Most recently he designed Undermain’s performance of 10 Out of 12 by Anne Washburn, and engineered Dallas performances of We’re Gonna Die by Young Jean Lee.

Jenna Richanne Hannum (Assistant Director) Jenna is thrilled to be a part of her first Second Thought Theatre production. Jenna studied theatre at SMU as a President’s Scholar and Meadows Scholar, and graduated in 2015 with a degree in Theatre Studies. She is currently pursuing her passion for directing with several theatres in the DFW area, and most recently directed House Party Theatre’s Shadow Woman by Claire Carson. Jenna’s upcoming projects are with Stage West, where she will serve as Assistant Director for their production of Hir by Taylor Mac, and Spoke Media, where she will be directing audiobooks.

Lauren Volz (Stage Manager) Lauren is a freelance stage manager in the DFW metroplex. She’s a Hoosier turned Texan, originally hailing from the snowpocalypse-prone northern Indiana that she has happily traded for 100-degree summers. She’s a graduate of Ball State University with a BA in Theatre Production: Stage Management and Telecommunications: Digital Video Production. Some favorite experiences include: Evil Dead: The Musical (Ball State University), A Little Night Music and The Minotaur (Theatre Three), and Titus Andronicus (Shakespeare Dallas), as well as working with Cedar Lake Contemporary Ballet, L-E-V, and Dance Theatre of Harlem at Jacob’s Pillow Dance Festival. Special thanks and love to all her family, both back in Indiana and newfound here in Texas.

Drew Wall (Producer/Technical Director) Drew is currently the Director of Operations for Second Thought Theatre and has been working with the company since 2007. During that time, he has served as an actor, designer, producer, production manager, and resident artist. Second Thought acting credits include Straight White Men, Belleville, Nocturne, The Great God Pan, Booth, Red Light Winter, A Behanding in Spokane, The Bombitty of Errors, A Skull in Connemara, The Country Wife, and Lobby Hero. Other (select) credits include Gloria (Dallas Theater Center); Long Way Go Down, Beauty Queen of Leeann, Totalitarians (Kitchen Dog Theater); On The Eve, Defiance (Theater Three); The Dog Problem (Undermain Theater). He is also a freelance carpenter, welder, and designer working for many other local theater and tv/film companies in the DFW area. Drew holds a BFA in Theatre Performance from Baylor University, is represented by the Kim Dawson Agency, and also a company member of Kitchen Dog Theater. He would like to thank Abbey Magill, his friends, and family for their constant love and support.