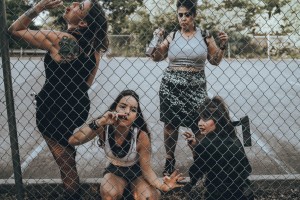 Discussing her plans for creating the world of the play, Director Vela says Revolt. She said. Revolt again. is not a traditional play and will not look like anything most audiences have seen before. “Quite the opposite,” said Vela. “We’re all (the cast/crew/design team) both terrified and thrilled to see what’s going to happen in the room once we get up on our feet. This piece is not thought-provoking. It’s thought-changing, in terms of culture, in terms of sex, gender and the act, in terms of what it means to go to the theatre. We’re all excited to get inside it and come out changed.

Artistic Director Alex Organ agreed. “This play confronts the complexities of living as a woman in a world built largely by and for men,” he said. “Those frustrations seem to have reached a boiling point in 2018, so it felt like the right moment to give those voices a megaphone. Our community has such a wealth of fearless female theater makers – this was also an opportunity to get several of them in the same room and let them wrestle with a play that is at once shocking, irreverent, hilarious, and groundbreaking.”

To be a woman in the twenty-first century is to experience – and to embody – a world of contradictions. To express them all in one play is impossible. But, Second Thought Theatre is going to do it anyway. Work, relationships, family, sex, and power intersect as one daring group of actors turns everything you thought you knew directly on its head. Language is inverted, bodies are distorted, men are banished, and nothing is sacred in a bold, provocative, riotous play like nothing Dallas has ever seen before. Helmed by STT Artistic Associate Christie Vela (director of Bull and Straight White Men), Revolt. She said. Revolt again. is nothing short of revolutionary.

The ensemble cast consists of five actors playing a multitude of roles. In addition to Vela, Jenny Ledel returns to the Second Thought stage after a heart-wrenching performance in this season’s Empathitrax, and Lydia Mackay also returns for the first time since Hunter Gatherers in 2010. Max Hartman was last seen on the Second Thought Stage in Othello, and Tia Laulusa makes her Second Thought debut.

Christie Vela (Director, Actor 1) has previously been seen in Enemies/People, A Kid Like Jake, and The Necessities and directed Bull and Straight White Men for Second Thought. She is a former member of the Brierley Resident Acting Company at Dallas Theater Center where her acting credits include Inherit The Wind; Deferred Action; Romeo & Juliet; Sense & Sensibility; Medea; The Book Club Play; A Christmas Carol; Les Misérables; Sherlock Holmes: The Final Adventure; King Lear; God of Carnage; Joseph and the Amazing Technicolor® Dreamcoat; and The Beauty Plays. At DTC she directed A Christmas Carol (2015), Gloria, and Fade. Christie is also a company member of Kitchen Dog Theater where she was last seen in Paper Flowers and where she has directed Se Llama Cristina; The Turn of the Screw; Boom; and The Pillowman. You’ve also seen her work as director/actor in the Metroplex at Echo Theatre, Amphibian Stage, Undermain Theatre, Shakespeare Dallas, Teatro Dallas, and Theatre Three. Most recently she directed Native Gardens at Trinity Repertory Theatre in Providence, RI and made her Stage West directing debut with Don’t Dress for Dinner.

Lydia Mackay (Actor 2) is an Assistant Professor of Performance in the Theatre Department at Texas Christian University. In addition to being a theatre educator, she’s a stage and voice actress, she performs live readings, produces, directs, and designs fight choreography. Select DFW theatre credits include: Hunter Gatherers (STT); Les Liaisons Dangerueses, She Kills Monsters, Other Desert Cities (Theatre Three); A Christmas Carol, White Rabbit Red Rabbit (Dallas Theater Center); Richard III, The Merry Wives of Windsor, A Midsummer Night’s Dream (Shakespeare Dallas). She holds an MFA in Acting from SMU, is a Certified Yoga Teacher, and is a proud member of the Actor’s Equity Association. Lydia is the Co-Founder/Producing Artistic Director of The Drama Club and is represented by The Mary Collins Agency. She would like to thank YOU for supporting live theatre in Dallas. GO BIG D!!!

Jenny Ledel (Actor 3) is an actor living in Dallas, TX.  She is an artistic associate at Second Thought Theatre and a company member at Kitchen Dog Theater. Theatrical credits include Trinity Shakespeare Festival, Undermain Theatre, Theatre Three, Texas Shakespeare Festival, The Dallas Museum of Art, Shakespeare in the Bar, ​​Shakespeare Dallas, and WaterTower Theatre.  Past Second Thought credits include Empathitrax, Anton in Show Business, The Glory of Living, Pluck The Day, Belleville, Othello, A Kid Like Jake, and Grounded.  She is a multiple recipient of the DFW Critics Forum Award for Best Actress.  She is also a playwright, commercial actor, and voiceover artist.  Her television and film credits include One Tree Hill, Spider Veins, and Karma Police.  She is represented by The Mary Collins Agency.

Tia Laulusa (Actor 4) is honored to be making her Second Thought Theatre debut! She graduated with an MFA in Acting from Southern Methodist University in May 2018 and is thrilled to have Revolt. She said. Revolt again. as her first post-grad show. Tia is represented by the Mary Collins Agency, and her DFW credits include: Frankenstein, Inherit the Wind (Dallas Theater Center); Macbeth (House Party Theatre); Twelfth Night, Iphigenia in Aulis + Tauris, This Sweet Affliction, St. Joan of the Stockyards, Mary Stuart (Southern Methodist University). Originally from Portland, Oregon, she sends profound gratitude to her family from afar as well as to her friends and mentors here in Dallas.

Max Hartman (Actor 5) is an actor/musician/composer form Dallas, TX. Max is happy to return to Second Thought Theater, having last appeared in their production of Othello. A long-time company member of Kitchen Dog Theater, his work there has earned him Best of Dallas honors from D Magazine, The Dallas Observer and The DFW Theater Critics Forum, most recently garnering raves for his work in POMPEII!! A musical he co-created with fellow Dogs Cameron Cobb and Michael Federico. Other recent favorites at KDT include Trevor, Ironbound, The Arsonists, Barbeque Apocalypse, Becky Shaw, and Betrayal. Elsewhere: On the Eve at Theatre 3, Penelope with Undermain Theater, Twelfth Night (Actor and Original Music) with Shakespeare Dallas, where he also composed music for The Winter’s Tale, Much Ado About Nothing, and A Midsummer Night’s Dream. He has composed scores for Shorts, Feature Films, and Documentaries, most notably for Barbara Davidson’s EMMY Award winning Caught in the Crossfire. Also a singer-songwriter, Max continues to record and perform with his band MUR, who were recently honored with an appearance in The ATTPAC’s ELEVATOR PROJECT. In Film, Max recently earned raves for his work in the Sundance Film Fest hit Never Goin’ Back, but he is perhaps best known for his work behind the mic as the long time voice of Domino’s. Max is represented locally by The Horne Agency and would like to thank you for continuing to support local theater. Without YOU we are just lunatics playing pretend in a dark room alone.

Alice Birch (Playwright) is a writer. Her theatre work includes We Want You to Watch for the National Theatre; Anatomy of a Suicide, Ophelias Zimmer and Revolt. She said. Revolt again for the Royal Court; Many Moons for Theatre503; Little Light at the Orange Tree; The Lone Pine Club for Pentabus; Little on the Inside at the Almeida and Clean Break; and Salt for Comedie de Valence. Film work includes Lady Macbeth. She has won the George Devine Award, the International Critics Prize at the San Sebastian International Film Festival, the Critic’s Choice Award for Best First Feature at the Zurich Film Festival and the Arts Foundation Award for Playwriting. She is currently under commission with the National Theatre, the Royal Court, the Almeida, Paines Plough and Clean Break. She is writing a TV adaptation of Love & Capital for James Schamus and Potboiler Productions and an original pilot for HBO.

Alex Organ (Artistic Director) is the Artistic Director of Second Thought Theatre. At STT he has appeared in Enemies/People, The Great God Pan, Othello, and Red Light Winter, and he directed Grounded, Cock, and A Behanding in Spokane. He is a member of the Brierley Resident Acting Company at the Dallas Theater Center, where his credits include The Trials of Sam Houston, Frankenstein, Miller, Mississippi, Inherit the Wind, Public Works: The Tempest, Constellations, All The Way, A Christmas Carol, Sense and Sensibility, The Rocky Horror Show, Fortress of Solitude, and Fly By Night. Elsewhere in DFW, Alex has been seen at Undermain Theater (The Droll; The Flick; Profanity), Trinity Shakespeare (Julius Caesar; Macbeth; Taming of the Shrew; As You Like It), Theater Three (The Farnsworth Invention), WaterTower Theater (Putting It Together; Little Shop of Horrors), Lyric Stage (The Most Happy Fella), and Shakespeare Dallas (Coriolanus; Hamlet, Two Gentlemen of Verona; As You Like It). Regionally he has appeared at the Alley Theater, Cincinnati Playhouse in the Park, Repertory Theatre of St. Louis, Elm Shakespeare Festival, and New York’s Epic Theater Ensemble. Alex is a proud member of Actors Equity and a graduate of the Yale School of Drama.

Aaron Johansen (Lighting Designer) is thrilled to be returning to Second Thought for Enemies/People. Aaron spent eight years with the Dallas Theater Center starting as the lighting intern in 2007. In 2015 he amicably departed the company as their Lighting Supervisor to pursue a career as a full time lighting designer. Aaron has been designing with Second Thought Theatre since 2014 and is very proud to be named an Artistic Associate for the 2018 season. You might have seen his work at Dallas Theater Center, Kitchen Dog Theater (Artistic Company Member), Cry Havoc Theater co., Uptown Players, Dallas Baptist University, Trinity Shakespeare Festival, and Cara Mía Theatre. I hope you enjoy the show!

Ana Hagedorn (Stage Manager) is excited to be joining the cast and the creative team of Revolt. She said. Revolt again.  Recently, Ana wrote and performed her one-woman show Let Me Talk My Dreams about the legendary Margo Jones at the Margo Jones Theatre in Fair Park. Other favorite acting credits include Sister in A Christmas Carol (DTC); Mary Stuart in Mary Stuart (SMU); and Hilda in The Master Builder (Commonweal Theatre). Ana is a member of the Brierley Resident Acting Company at DTC and is the Communications Assistant for STT. When not acting or stage managing, Ana can be seen eating french pastries and teaching yoga.